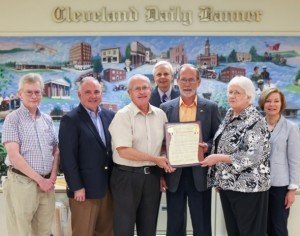 Swiger/Norton Scholarship for Communications was established in 2018 to honor Cleveland Daily Banner associate editors Gwen Swiger and Rick Norton. The scholarship will be open in 2020 to Bradley County students interested in pursuing careers in journalism and communications.

Staff Writer Brian Graves, in one of his final community actions as a member of the Cleveland Daily Banner newsroom team established a scholarship that will benefit local students who want to pursue a career in journalism and at the same time honors two local newspaper icons who have been great mentors to him.  “They are not only great examples of journalism, they are great examples of human beings,” Graves said.

Bradley County Mayor D. Gary Davis, a former Banner employee who worked in the advertising department in the 1970s and 1980s, was also on hand for the occasion.

“I worked with both Gwen and Rick many years ago, and I can’t think of two individuals more deserving of this honor here today,” Davis said.

Davis presented a resolution from himself and Cleveland Mayor Tom Rowland declaring the day to be “Gwen Swiger/Rick Norton Day” in Cleveland and Bradley County.

The resolution noted the many professional and civic accomplishments the two have earned during a combined 51 years at the Banner.

Ralph Baldwin, Banner publisher, congratulated the pair of editors who share the responsibility of running the community newspaper’s newsroom.

“It is a privilege to work with two such accomplished editors,” Baldwin said. “We are very fortunate to have them here in Bradley County.”

“The Community Foundation of Cleveland and Bradley County is known for its desire to contribute to the well-being of this community. To have one of its scholarships named in my honor was a surprise and honor,” noted Swiger.

“It’s rare for newspaper people to be on this end of a news story, especially editors,” Norton said. “It’s an honor to be a part of this, and even more so because it is being backed by some good people in this community who believe in the value of education, and in the potential that lies within future generations.”

Donations are made by simply writing a check to the Foundation designated to the Fund or online.