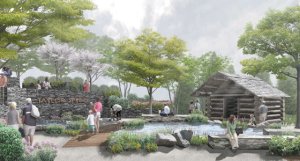 The Taylor’s Spring Park is a joint effort between the City of Cleveland, Bradley County and private donors who want to celebrate the history of Cleveland.

Taylor Spring is said to be the reason people settled in what is now Cleveland.  According to local history, Andrew Taylor built a log cabin in 1835 near a spring. Legislative action in 1836 created Bradley County and also authorized the establishment of a county seat.  That town was to be named “Cleveland” in honor of Col. Benjamin Cleveland. “Taylor’s Place,” which included Andrew Taylor’s home as well as the beautiful spring, was chosen as the location of the county seat because of the excellent water source available.

Until recently the spring had been under a building on First Street that had served as a law office in one side and a dry cleaners in the other side.  James Webb donated the law office side and the City of Cleveland purchase the dry cleaners side.  The City demolished the building to uncover the spring.

To bring the importance of this historic site to the forefront, the Cleveland City Council created a committee to develop a plan for a small park on the site.  Councilman Richard Banks is heading up a committee of citizens with an interest in local history and downtown to provide guidance for this new project. They include City Historian Bob George, businessman Jeff Morelock, business leader and philanthropist Allan Jones and Public Works Director Tommy Myers.

A name has been given to the new site that houses Andrew Taylor’s famous spring: Taylor’s Spring Park, with the tag “Historical Birthplace of Cleveland, Tennessee.”

It will become the first new park in our downtown area since the building of First Street Square.

The plan is for the park to be a place for people to see the historic spring, learn about this history of the site and to celebrate the birthplace of Cleveland in a natural setting.  The park will be a great addition to all the history-related locations around town.

Donations are made by simply writing a check to the Foundation designated to the Fund or online.

Learn More About
The Funds We Manage